So, the PTI Government is really very upset about the rising cost of pay and pensions in the federal government. Let me share a budget document with you all which shows the total cost of “Civilian” pension is PKR 470 Billion. for FY 2020-21, out of which cost of “Military pensions” being paid amounting to Rs. 359 Billion, whereas, the estimate of total civilian pensions is Rs. 111 Billion. 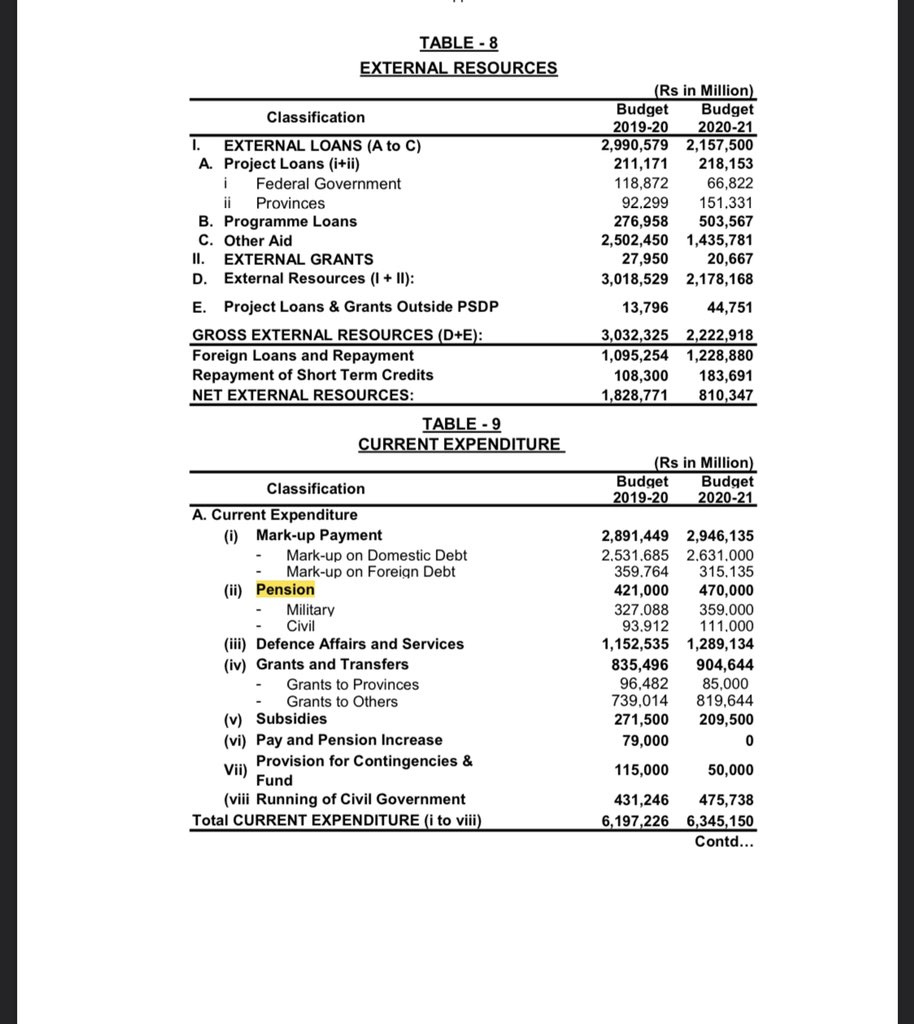 If you all didn’t know, the expenditure of pension of military personnel is incurred from the civil current expenditure. This amount is in addition to 1,289 Bn. defence budget allocated for the FY 2020-21 as against an allocation of Rs. 1,152 Bn. allocated for the previous year. This is a 12% increase in the defence affairs and services budget despite the fact that we are in the middle of a pandemic and approx GDP growth for FY 2019-20 is around MINUS 2.4%.

So basically we are spending 12% more on defence so that they can build more of their Multan Garrison Messes and Rawal Naval Messes while at the same time we allow more than 50% of our population to slip below the line of poverty. Let me remind you again that the net federal budget deficit is a record Rs. 3,437 Bn. which shall be financed by further borrowings from commercial institutions, which will again add more burden to already saturated fiscal space the country has.

ll the figures and document pages are publicly available on Ministry of Finance website and can be accessed by anyone to measure the magnitude of disaster this budget is going to bring upon all of us. This article is only in relation to the Federal government and nothing else. You need a rough estimate. Provinces pay around 800 Bn in pensions and around 1,000 Bn to armed forces. This is not a bashing of armed forces but just to expose the lies and contortion by the PTI government.

The reason Mltry pensions are higher than Civil, is that no one in the Mltry serves up to 60 yrs except the 3 Chiefs and CJCSC. A Maj retires in his early 40s, and you can rougly add 4-5 yrs of additional service on each rank, if promoted above the rank of Maj. Most of the civil pension is paid out of the provincial budgets. And total civilian pension is more than the military pension and that has always been the case.

As correct as the figures are, the fact remains that having a military isn’t a cheap affair. For a country like Pakistan, our geography and history compell us to have a strong military. It’s not a choice. What we chose however is to spend the civilian budget honestly. The fact also remains that the civilian pensions as a whole is actually federal+provincial . And Civilian pension makes 65% of total pension bill .