Asad Khattak versus Veena Malik fight turns bitter than ever as Asad Khattak is now sharing her messages on the social media where Veena Malik is abusing him and calling him names. She doesn’t seem to care about whether Asad would make it public or not.

Asad Malik is complaining on social media that he tried to give respectable life to Zahida bibi a.k.a Veena Malik when he married her on 20 December, 2013 but she never appreciated that and always made his life hell. He said that he always tried to make sure that she never feels bad about anything and yet she always demanded more and more and never wanted to settle in a family life. Moreover, he says that its about time he exposes her. 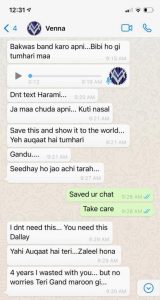 Asad Khattak says that Veena Malik fabricated false court orders, kidnapped their kids and brought them illegally to Pakistan and now she is not allowing him to see them. In an interview with Rashid Nasrullah, Asad Bashir Khattak says that Veena always preferred India over Pakistan and pressured him to settle in India leaving Pakistan. She always wanted the glamour of Mumbai and its nightlife in Bollywood.

Asad Malik seems to be on fire as he reveals more and more filth about Veena, her character, her illegal income and properties in Dubai and elsewhere. He says that Pakistani ambassador in Dubai is also protecting Veena. Ambassador gives special protocol to Veena and orders food for her from Ravi restaurant. He also facilitated Veena in getting a fake passport and helped her in getting kids to Pakistan.