MITHI: An awareness seminar on Hindu Marriage Bill 2016 was organized by District Development Association Tharparkar (DDAT), here on Saturday. Briefing the participants about the salient features of the Bill, social leader Krishan Sharma said that there had been no system of marriage registration in Hindu community. “The law would ensure the rights of women and also help to curb the forced conversion,” he added. 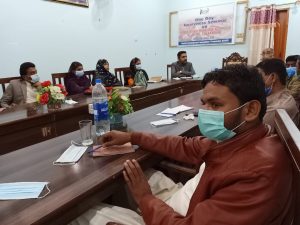 Since there was no system of registration of marriages in Hindu community, the women had no right of share in the property and assets because they had no written proof of marriage,” Krishan Sharma said.“Under the Hindu Marriage Law, the marriage certificate could be obtained through the Pandit within 45 days,” he said “The marriage of girls under the age of 18 years would be illegal, and in case any girl is forced for the tie the knot without her consent, the persons responsible, would be liable to be jailed for six months. Moreover, in case of violation of law, a petition could also be filed in the court.”

The Hindu Marriage law also envisages that a woman can approach the court in case of violence or torture by the husband or other persons, and seek divorce. “The woman has also the right to seek divorce in case the husband maintains no contact with her for two years.”Further, a family court shall decide the separation between the wife and husband while they both can reconcile through the court to continue, or terminate the marriage. In case, the husband wants separation, he will be responsible for bearing the living expenses of wife and children.

Krishan Sharma told the participants that there is provision in the law that both the man and woman can remarry after six months of court verdict regarding the separation.“The Hindu widows had no right to marry again, but the new law allows the widowers to get married again. This would resolve many problems often faced by widowed women and their families,” Sharma added. Dr Ashok Bakhatani, Mama Vishan Thari, Khanzadi Kapri, Akash Hamriani and and others also spoke on the occasion and said that there the need of the hour to create more nearness among the people in the backward areas like Tharparkar and Umerkot districts.

They opined that such events would greatly help people understand about such bills and laws on the sensitive issues.

Be the first to comment on "Hindu Marriage Bill 2016"