Mr Karam Ali Shah, the Judicial Magistrate and Civil Judgeof Nagarparkar has reaffirmed its conditional judgement in the cutting of Karoonjhar case and issued an absolute order directing the Kohinoor Marble Industries Karachi and Frontier Works Organisation – FWO to stop cutting of granite stones from Karoonjhar hills and remove machinery of the mining companies forthwith.

Mr Shah after hearing the case reaffirmed his earlier order of December 28,2021, completely banning the extraction from any point of the Parkar region. 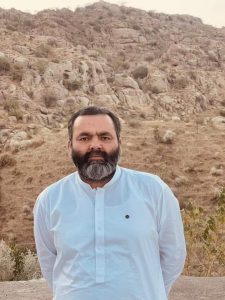 The court order said that the respondents No 1 and 2 (Kohinoor Marble Industries Karachi and Frontier Works Organisation besides filing objections on the question of law did not avail the opportunity of jury and evidence voluntarily, which was insufficient and that could not satisfy the court to recall its conditional order.

Apart from this, you both respondents No. 1& 2 ( FWO and Kohinoor Marble industries claim publicly that you are legally entitled for cutting and lifting the stone from Karoonjhar Mountain Ranges but you both do not disclose the lease agreement, survey reports, boundaries or any other document including its terms and conditions. Besides, you do not bother to reveal the NOCs taken from Environmental Protection Agencies, wildlife department, Forest Department, Culture and Tourism Department and Defence Ministry of the Pakistan which are mandatory prerequisite before starting the work if one is legally allowed and even you are realizing the responsibility of’ post- requisite mention in whole Sindh Mining Concession Rules 2002 and in other relevant laws.

“That you respondent No 1 and 2 – FWO and Kohinoor Marbles are not maintaining the record which is mandatorily required under article 5S SMCR 2002 where from the details of deposited revenue in government treasury could be found along with the details of the money transaction taken away by private persons by selling the state base assets” added the order. The order said that the illegal practice was being carried out for past many years with short intervals without following the standard operating procedures promulgated by the constitution of Pakistan under both provincial and federal governments’ codification.

“From above discussion it is observed that Karoonjhar has been dealt by all you respondents as ordinary mountain which is rich with granite stone only and it ought to be utilized only in one dimension, the dimension of construction but sorely it is the construction of one building or other but at the same time destruction of whole society and ecosystem.

No one from above official respondents has taken effort to find the actual importance of it; no one has come forward to dig out the multiplicity of its benefits. The reality is totally different as it is not just a mountain but a collective source of satisfied, certain and secure life. This mountain range is at the same time tourism, culture, heritage, the religious attachment irrigation, agriculture, defence, livelihood, the preservation of wildlife , forest with full greenery and much more.

The order further said that now court has reached a conclusion that cutting of the mountain range Karoonjhar is the pure act of public nuisance and it is nuisance of large scale, because it is only sources of life of two lac people of Nagarparkar, 1t seems that his mountain not exist only on earth whereas it also exists in the hearts of the people, when someone cuts this mountain not only all senses of inhabitants becomes hurt and harm, but their deep rooted feelings also and same has been discussed in conditional order dated 28 12 202. So Respondent No. 1 & 2 (Kohinoor Marble Industries Karachi and Frontier Works Organisation – FWO are unconditionally directed to remove all machinery forever and stop your working on all ranges of the mountain and any disobedience of the order of this court would bring the relevant law of 188 PPC in motion against you all and Respondent No 3 to 5 – SHO Police Nagarparkar, the SHO Dano Dhand and the SSP Tharparkar are strictly directed to make visible compliance of this order and submit same report before this court in the first week of every month in future, otherwise it would be deemed that you all are in accomplices and same disobedience would constitute against you and let the copy of order be supplied to all respondents for necessary compliance hence this absolute order is announced accordingly.