Mr Sohoo and Dr Pir G.Hussain sharing the details of the vaccination drive launched in the desert from February 1, informed the media on Wednesday that they had achieved their target as per the directions of the Sindh Health Minister Dr Azra Fazal Pechuho ,Mr Zulfqar Ali Shah, the Secretary of Sindh Health Department and he officials of National Command and Operation Centre (NCOC) inoculation against the deadly virus. Mr Sohoo and .Dr Pir Ghulam Hussain informed that they were giving the target of 102,0282 vaccinating people of the desert district but they managed to achieve it by vaccinating 991288 ( 98%) clients due for first dose and 819,752 out of 819,776 (100%) due for second dose to Tharis and got target through the concerted and committed efforts by their teams during vaccination drive against Covid-19. 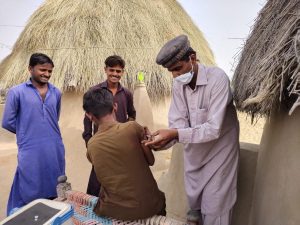 “Our teams went from door to door across the desert district spreading over 20 thousand square kilometres and jabbed the people as per the directions of NCOC’s functionaries ” they added and said that the credit of achieving the target once again went to health teams and people of the desert region who fully supported them during the process of inoculation. The officials said that the inoculation process in Thar had begun on February 21 last year and they had achieved their targets successfully with the exemplary cooperation of the people of the desert district. They said that during the campaign 239 health teams formed by district administration had achieved the target by vaccinating people while they were given the target for vaccination by the high-ups NCOC.

The DC and the DHO said that in the process of the booster dose, which they had undertaken by themselves, 50,086 people were vaccinated and their success percentage remained 99.5 which were due for booster dose adding they observed that it was gigantic task under the challenging conditions of the desert region but their dedicated officers, doctors and the health workers made it happen keeping in importance of the healthy life of Tharis to fight against the deadly virus.

They said that they formed 239 teams across the district for the vaccination purpose against the deadly virus adding they informed the media that a control room was also established in the DHO office under the supervision of Dr Munir Akhtar, who is also the focal person of the vaccination process.

Here it may be recalled that Mr Asad Umar, the Chairman of National Command and Operation Centre had given the appreciation certificate to DC Mr Sohoo for his great dedication and continuous handwork towards the fight against Covid-19 Pandemic while contributing commendably towards National Covid Vaccination Drive for year 2021.

The activists working in Tharparkar on different issues highly lauded the efforts of the officials of health and district administration for achieving the target despite lack of the required vehicles to have any easy access to the most of the areas. They hoped that officials would continue to serve the people of the desert district with similar enthusimsm with their great commitment to achieve such goals in future.